Website Design, Google's Algorithms, Online Marketing change at a rapid pace. And, cybersecurity is more important than ever. Keep up to date with the latest changes here on our blog.
Font size: + –
1 minute reading time (227 words) 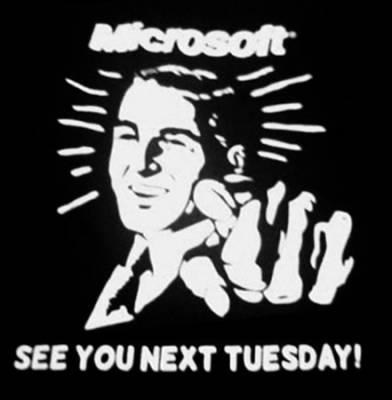 As we again approach a critical patch Tuesday, Microsoft is releasing 57 patches to address issues such as OS, Office, Explorer, and other vulnerabilities.  It is important to install these updates as soon as they are released.  If your computer is not set to Install Updates Automatically, you really should change your settings.  A patch was released Friday for flash which addresses two known hacks.  If you have not updated flash recently, please visit http://get.adobe.com/flashplayer/ to do so.  Just uncheck the option for the security scan if you so choose.  What is 'Patch Tuesday' you ask?

Patch Tuesday is the second Tuesday of each month, on which Microsoft regularly releases security patches. Starting with Windows 98, Microsoft included a "Windows Update" system that would check for patches to Windows and its components, which Microsoft would release intermittently. With the release of Microsoft Update, this system also checks for updates to other Microsoft products, such as Office, Visual Studio and SQL Server.

Patch Tuesday begins at 18:00 or 17:00 GMT (10:00 PST (GMT-8) or 10:00 PDT (GMT-7)). Sometimes there is an extraordinary Patch Tuesday, 14 days after the regular Patch Tuesday. There are also updates which are published daily (e.g. definitions for Windows Defender and Microsoft Security Essentials) or irregularly.